A Move To Change Homo Sapiens To Homo Irrationalis 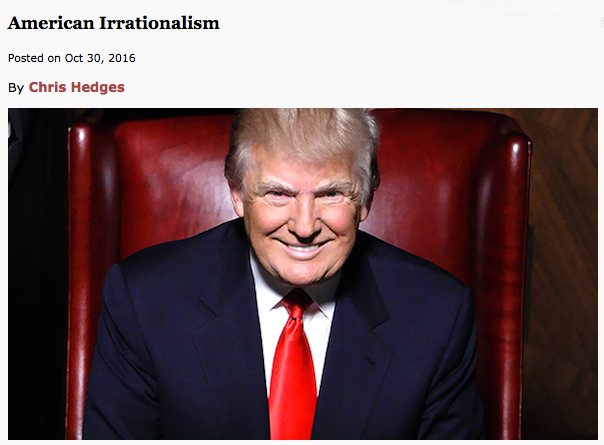 In the near future I'll be expending great effort on my part to get your specific epithet changed from Homo sapiens to Homo irrationalis...and it may not be obvious to you why I'm doing this, but just give it a little more time.  To help you along, however, I've linked an artilce by Chris Hedges titled American Irrationalism.

Some people may avoid reading Mr. Hedges writings because they can be downright depressing, but he often hits the nail right on the head.  For instance, take this excerpt, "We are blinded to our depressing reality by the avalanche of images disseminated by mass media. Political, intellectual and cultural discourse has been replaced with spectacle. Emotionalism and sensationalism are prized over truth. Highly paid pundits who parrot back the official narrative, corporate advertisers, inane talk shows, violent or sexually explicit entertainment and gossip-fueled news have contaminated cultural life. “Reality” television, as contrived as every other form of mass entertainment, has produced a “reality” presidential candidate."

Mr. Hedges puts it much more succinctly by saying, "The false values of reality TV have been carried over into the current presidential race."

Now what rational person could argue with that?

Signing off for now but best regards!