In all sincerity, it's my belief that a powerful heart-wrenching environmental message must awaken the masses as to the real dilemma facing mankind.

Since none of us is as smart as all of us, it's going to take several talented people to get the right message across that gets the average person to never see themselves - particularly, their place in the environment - the same way ever again.

What are we dealing with? Simply put, an existential crisis that falls under the category of a hyperobject. According to Timothy Morton, hyperobjects are overwhelmingly complex things “that you can study and think about and compute, but that are not so easy to see directly.”  They're akin to something I've dealt with much of my career as a fish biologist; i.e., "wicked problems".

Adam McKay, director of Don't Look Up, acknowledged what I've struggled with for so many years: “We’re trying to describe the indescribable. What a great, futile mission.”

I certainly don't have the talent to do that by myself, but I do believe that I have the basis for a film that describes the indescribable better than Don't Look Up did. Why? Because it will be more relatable to the audience in many ways. First, there will be no allegories in this film. Secondly, it will all be based on reality...at least my reality. Not to sound overly hubristic, but this film would be based on my crazy, convoluted, and quirky life.

I hope that someday, someone connected to Hollywood will take the time to hear me out; something that might require sitting beside a campfire and Alaska pristine river for several days, because this is not a simple, straight-forward story narrative.

What is the main theme of this movie? That, can be best described by none other than E.O. Wilson when he so eloquently stated the following in Of Ants and Men: “Humanity is a magnificent but fragile achievement.  We are an evolutionary chimera, living on intelligence steered by the demands of animal instinct.  This is the reason that we are mindlessly dismantling the biosphere, and with it our own prospects for permanent existence......What I’ve come to learn is that humanity’s troubles are due substantially to the fact that we are a dysfunctional species.”

Maybe, someday, these guys will be sitting around my kitchen table discussing the possibilities - either to produce the film or finance the the effort! 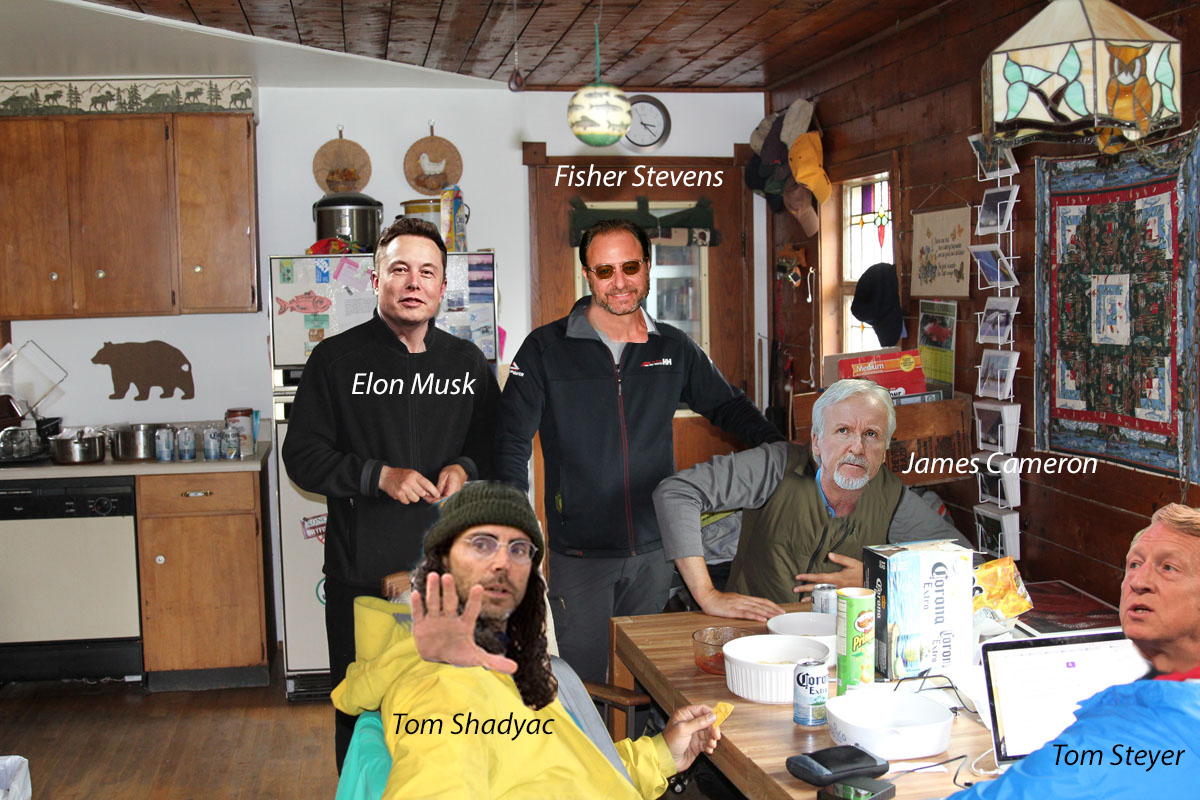 This story narrative is akin to a Robert Altman film because he "loved the chaotic nature of real life, with conflicting perspectives, surprising twists, unexplained actions, and ambiguous endings."

Here is the summary: This is a story about an unknown and unassuming - possibly delusional - fish biologist living in the middle of nowhere leading a life no different than Dr. Joel Fleischman of the Emmy winning show Northern Exposure of years gone by. This biologist - known to some of his colleagues as “The Don Quixote Of Fish Biologists” - is perversely driven to make a difference in curbing the relentless onslaught of ecological stressors that Homo sapiens (i.e., “the wise ones”) inflicts on planet earth by reaching the masses in a way that gets the individual to fully contemplate their place in the environment and never see themselves or the environment the same way ever again.

It’s a story not unlike a Robert Altman film; in fact, it’s very much like A Prairie Home Companion, which Altman directed. Speaking of A Prairie Home Companion, this biologist’s narrative mirrors a Garrison Keillor News From Lake Wobegon yarn. The only difference is that the eccentric people in the biologist’s story are real - including every zany adventure and misadventure…not to mention the potential impending dreadful societal consequences that mirror sci-fi movies of old.

However, it’s mostly about his failed attempts - including the myriad letters, e-mails, videos, and phone calls he’s made to influential writers, conservationists, actors, psychiatrists, and film industry personnel with hopes of recruiting their help - in his pursuit of getting such a noble and lofty message out. His story is not unlike Colonel Sanders who had over 1,000 rejections before someone was willing to give his chicken recipe a try.

Throughout our biologist's decades-long quest to make that difference, he eventually realizes just how profound Joseph Campbell’s words are: "We're not on our journey to save the world but to save ourselves. But in doing that you save the world."

Ultimately, it's a story about psychology and mental illness and the need for the human race to “get in charge of itself psychologically” and realize that each and every individual, in some way, is part of the impending environmental quandary…and, the solution if mankind is to avert unimaginable widespread ecological and social calamity.

In the end, this film will take a critical and irreverent look at the human race, and ask the ultimate question, "Are Homo sapiens (i.e., "the wise ones") capable of coming together and averting a calamitous future?"

Three Meltdowns Are Enough For One Winter - But, Winter Isn't Over Yet!
A Pitch About A Pitch
Why A Book Won't Cut It
A Video Made 5-Years Ago Looking For Help With My Book Titled Eclectic Ecolosophy & A Plea For Literay Help