A Blog From A Fish's Perspective

When clicking on the links, use the back arrow to return to this blog.

Coming Soon - A Blog Titled "Circling The Drain" Inspired By The Venerable George Carlin And His Cynical Perspective On The Human Race (remember, my name is Cyprinid Cynicalis)

In preparation for that blog, here's the link to a video clip that features some of his thoughts about what we humans have done - and are doing - to our planet that might be resilient...but it's not infinitely resilient: https://www.youtube.com/watch?v=-xp-z1zw4u0

Why Even The U.S. Fish & Wildlife Service Neglects The Fishes They Espouse To Revere

“Basically, we’ve got way too many animals on too small an area for too long a time.  They’re way over the elk refuge’s carrying capacity.”  Barry Reiswig - Refuge Manager of the National Elk Refuge Jackson, Wyoming 1996 - 20071

Photo to the left - National Park Service photo.  All other photos by "The Don Quixote of Fish Biologists"

Why Even The U.S. Fish & Wildlife Service Neglects The Fishes They Espouse To Revere 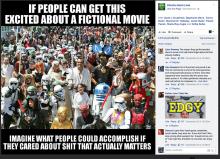 Now this goes along with that last post where I ask, "Can humans agree on anything?".  Obviously the person who made this depiction of a lot of humans getting excited about a fictional movie was making the point that Homo sapiens (i.e., the wise ones) may not be so wise when it comes to expending much of their energies on trivial matters.  And as is often the case with you humans, there were plenty of disagreement over their assertion.

Einstein Even Had A Soft Spot For Us Fishes

I put this particular picture in with the comments on the right for a particular reason.  And that is that some day I'll be writing a post asking whether or not humans can agree on anything.  It seems that there is one person who thinks that this cartoon is spot on, while another basically calls bull shit.

I pay close attention comments to blogs, and there are very few post that I don't find similar argumentative perspectives.  Seems to me that you humans live in a  culture driven by never-ending arguments. 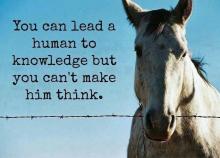 Right From The Horse's Mouth

Could I have said it any better? 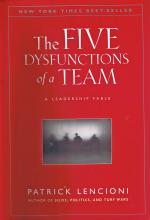 Another What Were They Thinking (WWTT): Muslims Won't Deliver Beer

Now I'm going to touch on a few highly controversial topics with you humans in this post, and I want it known from the onset that I'm not supporting or bashing any religion or any individual's sexual orientation.  There might be some of you that get upset simply because I'm going to show a clip from Fox News because very often many of you (i.e., liberal-minded types) accuse them of being one-sided...even though their claim is to provide "Fair and Balanced" news. 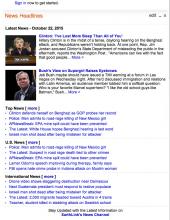 If you were paying attention to today's news, Jeb Bush's response to a question about who his favorite Marvel superhero was - made quite the stir.  What caused the commotion was not his comment about liking Batman, but came from when he tried to interject some humor by stating that the new Supergirl was "looking pretty hot". 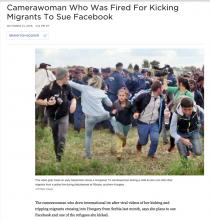 Might Have To Start A Daily What Are They (i.e., Homo sapiens a.k.a. "wise ones") Thinking

I know that I'm being pretty harsh on you humans, but my whole point in this blog is to show that you may not be as rational as you think you are.  Why would I do such a thing?

It all boils down to your treatement of the environment; if you don't treat each other with respect - what does that say for the treatment of something like a tree or fish?

I won't expound on these postings - I'll just let them speak for themselves.

Blog 3: A Continuation Of The Need For The Human Race To Get In Charge Of Itself Psychologically

I need a short name for what is lacking; I call it the ecological conscience.  Ecology is the science of communities, and the ecological conscience is therefore the ethics of community life.  I will define it further in terms of four case histories, which I think show the futility of trying to improve the face of the land without improving ourselves. Aldo Leopold in The Ecological Conscience (1947) 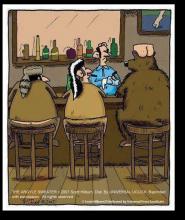 My Fish's Sense Of Humor

Although I was highly offended by Rodney Dangerfield's one-liner in Caddyshack - Last time I saw a mouth like that, it had a hook in it. - I just think this cartoon by Scott Hilburn is hilarious...don't you?

To make it match the other two hats, he could have had that hat on the bear turned the other way (that is if he'd harvested a male of your species)!  Now wouldn't that have been funny...especiallly if it was cold in that bar.

Although we fishes are often in very cold water, we don't have to worry about such a thing.