For those with a sense of humor, which I have, you gotta love how so many of your politicians use the term, “I’m not a scientist”, and then go on to disregard what scientists are telling them regarding matters of great concern.

Well, I’m no scientist either, but I know several who constantly study us fishes; seems they’re always trying to figure us out.  We fishes have a joke we tell about those scientists - at least the fish biologists.  It goes like this - Why don’t fish biologists catch many fish?  Because they’re always fishing where the fish are supposed to be!  Isn’t that a knee slapper?

I don’t have to tell you that I’m no psychologist or psychiatrist either, but I know narcissism and other psychological maladies when I see them.  Did you ever wonder why Donald Trump is holding these "Thank You" tours?  I think it has nothing to do with thanking people; it’s just a way of him getting more attention and feeding his ego.

Now David Brooks (a conservative journalist for the New York Times) isn’t a psychologist either - at least I don’t think so - but he seems to aptly explain Trump’s communication style by linking it with what psychologists refer to as “flight of ideas”.  Here’s how he described Trumps oratory pattern back in August:  And we’re not used to talking about the psychological mental health of our candidates. And in some things, I think it’s not fair to talk about his mental health, in terms of how he operates with his kids in his private life, but there is a such a thing as public psychology and political psychology.

And in public, he obviously displays extreme narcissism, but most of all, he displays a certain manic, hyperactive attention. And so if you graph a Trump sentence, every eight-word verse, he’s like associative thinking.

And so he’s not in control of his own attention, I don’t believe. And, therefore, you get these rambling, weird sentences. You get things he patently shouldn’t be saying. And then even this, I’m being sarcastic about the sarcasm, I’m obviously being sarcastic, and then maybe a fifth a second later, he said, but not that much.

So he is contradicting himself within 12 words. And that’s a condition.

Keep in mind that that was back in August and he and his liberal counterpart, E.J. Dionne, were writing him off on PBS’s NewsHour…and here you are, he’s your President-elect!  Maybe those two need to get in charge of themselves psychologically.

Right now there are a myriad of issues arising that Donald Trump will have to address once he’s officially the POTUS.  It’ll be interesting to see if that little incident where China captured the Navy drone is resolved by mid January…but it’s unlikely.  And I’m sure if things escalate on Trump’s watch, he’ll blame it all on the Obama administration.

Maybe the biggest one - and one he claims he can accomplish - is bring unity to the United States.  I don’t want to get cynical here, but first he must bring it to his own party, then he can focus on the rest of the country.  And if you viewed the previous link - his “Thank You” tours aren’t exactly making amends between his supporters and Hillary…they still want to lock her up.

I’m going to go out on a limb here folks and make a bold prediction.  But before I actually do that, there are some of us fishes that literally come close to going out on a limb…because there is one species called the splash tetra that does lay eggs not in water, but on the leaves of plants hanging from of limbs.  Really!  It’s fascinating how both the male and female simultaneously expel and fertilize the eggs in mid air and get them to stick on the leaves. 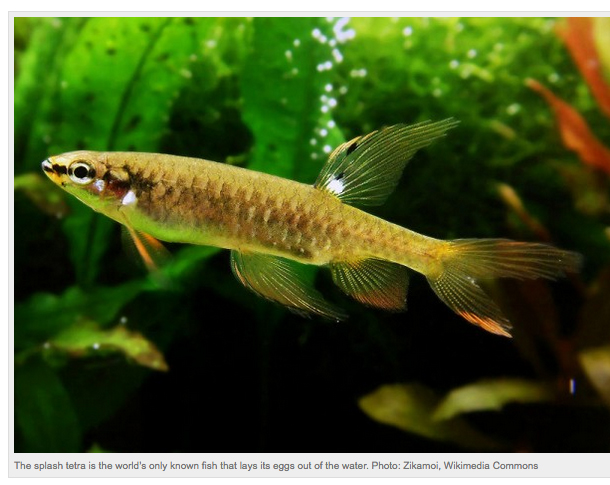 My prediction is that during Trump’s tenure as President of the United States, he’ll wreak so much chaos that he’ll make the Republican Party totally irrelevant - the environmental realm will be just one facet of his failings - so much so that they may never recover.

There will soon be a time that climate change concerns and the continual loss of biological diversity will be so obvious that James Inhoffe, Scott Pruitt, and even Trump himself won’t be able to deny that they’ve helped foul your nest beyond repair; but that’ll be long after the majority of diehard GOPers jumped ship like rats off a fast sinking vessel.

I’ve gotten some feedback from some of you followers, and I must admit that I’ve tended to come across somewhat pessimistically-sounding of late, but here’s some optimism.  Here’s to hoping that the chaos Donald Trump unleashes, and it won’t only be in the United States - but the entire world, will set the chaos theory in motion that will eventually attain some semblance of order…maybe a whole new political system for the United States.

At the grandest scale, Trump's actions cause a Civil War or World War III (or both), then maybe the resultent order will be a resetting of moral values among all nations that leans towards doing things right instead of doing things wrong; in other words, the human race getting in charge of itself psychologically.