A New Year's Resolution To Post More Uplifting Things...But Until Then We're Heading Into Another Mass Extinction 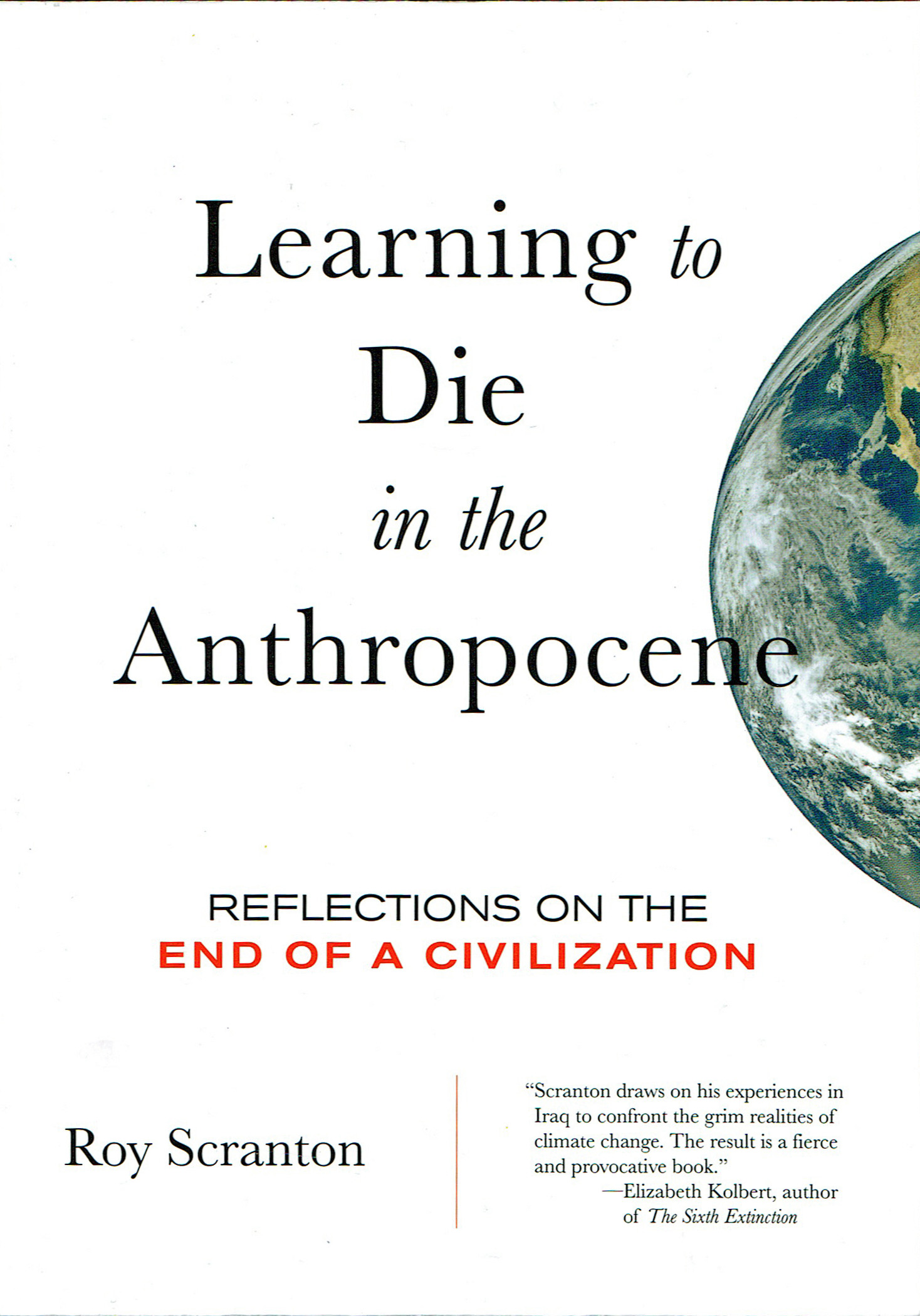 Sometimes I worry about my friend "The Don Quixote of Fish Biologists", for he doesn't let go of his life's mission of heightening the public's awareness of environmental issues...this mass extinction thing being just one (although when it's all said and done, it's just indicative of what the future holds for the human race).

Do you know what he did this past Christmas Eve?  No, he wasn't drinking spiked eggnog or decorating the Christmas tree our even out caroling, he was reading Roy Scranton's book about Reflections on the End of a Civilization...how crazy is that?  While everyone else had visions of sugar plumbs dancing in their heads, he was trying to envision how best to get his message out.

Earlier that day, yes - Christmas eve, he had a deadline for a book proposal - a book that he knows has to be different if it's going to make a difference.  He finally submitted the proposal at 6:00 pm that evening.  He'll tell you he's not a procrastinator and that he had too many other things going in his hectic fast pace of life to get it done a month ago...but I don't know about that!

Here's an excerpt taken from an earlier draft of his book talking about how you humans will often put off things that are in your long-term best interest - even experiencing great discomfort - just because you don't want to suffer immediate displeasure now (like crawling out of a warm bed on a cold night to take a leak).  Personally, I don't see why you don't go right there in bed, we do our business (numbers one and two) no matter where we're at...it doesn't bother us!

I said long-term, but that could actually be as little as five minutes as demonstrated in the excerpt!  One of his mantras is, "You got to know sin to preach against sin".  And yes, he finds himself occassionally writhing in bed just to put off what he naturally has to do.  And while he's tossing and turning, he wonders how many others of you are just like him?

It’s mid-February and twenty degrees below zero outside.  A strong north wind is slashing angrily at your loose fitting windowpane that’s missing several chunks of caulk.  It’s 3:30 am and you’re snuggled up under your goose down comforter with the electric blanket setting set on high.  Because you’re energy conscious, you’ve turned the thermostat down below the 60-degree range before crawling into bed.  Although it’s toasty under the covers, if you move your leg six inches you can feel the stone cold sheet brush against your lily-white sensitive skin.  Now your bladder is beginning to remind you that you shouldn’t have had that last cup of decaf coffee while watching Stephen Colbert.  How much discomfort are you going to endure before you force yourself out from your heavenly haven and answer nature’s call?  Each time you’re about to peel off the covers, you think about how cold the frigid linoleum floor will feel on the balls of your tender feet?  The damndest thing is, it only takes three minutes in a situation like this to solve the pressing, distressing concern - yet we’ll endure agony for much, much longer!  Although as each and every minute ticks by, the cliché - pay me now or pay me later - reinforces itself, we’ll do no different the next time.

His message with this excerpt is that too many things in your lives are merely a matter of scale; and this extinction thing is no different.  Too many of you humans will put off doing what's right regarding haulting habitat destruction or poaching in favor of the short-term gain (which is often a monetary payoff)...but at our expense!

As this ecologist - Mike Chase - points out in that link, if you humans aren't willing to keep African elephants around much longer, what about other less important species (that is, less important in your minds)? 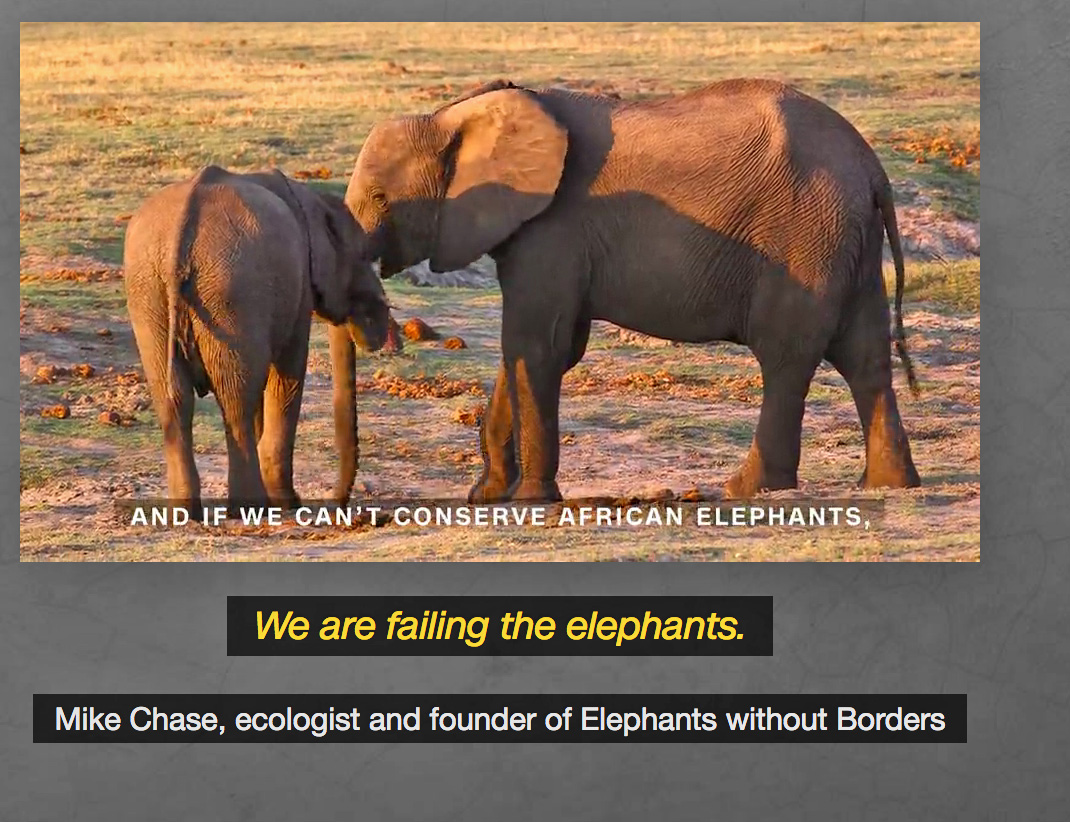 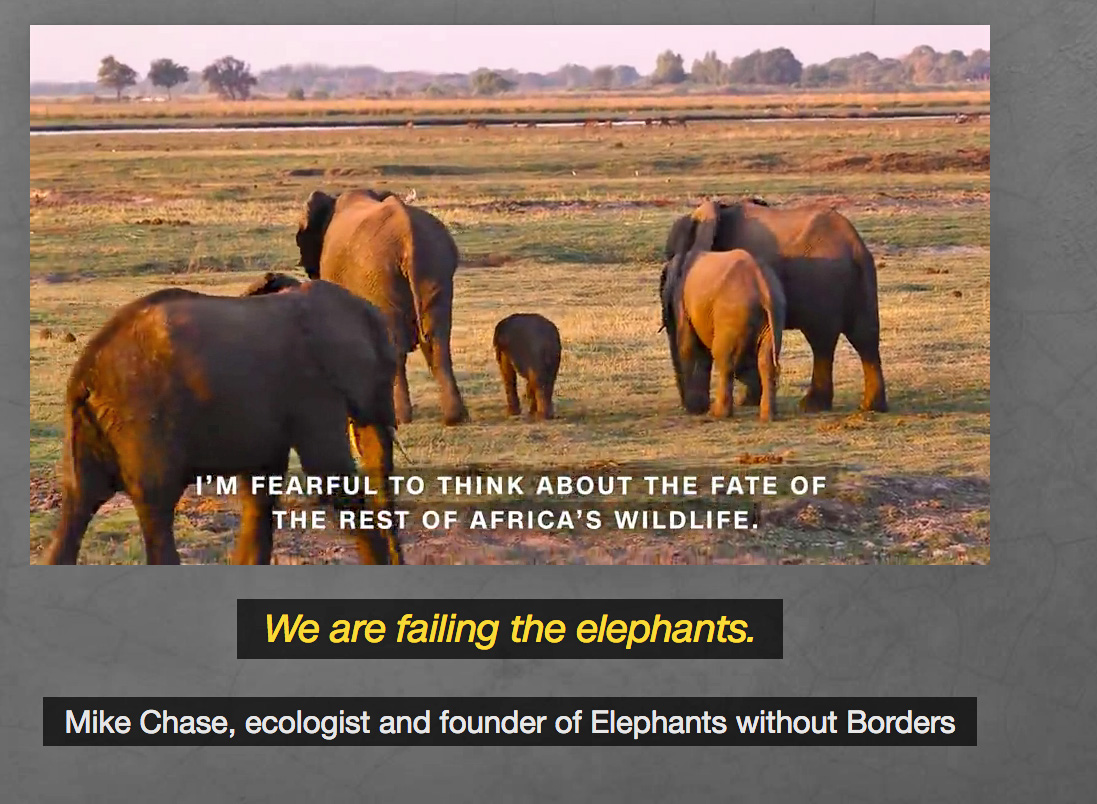