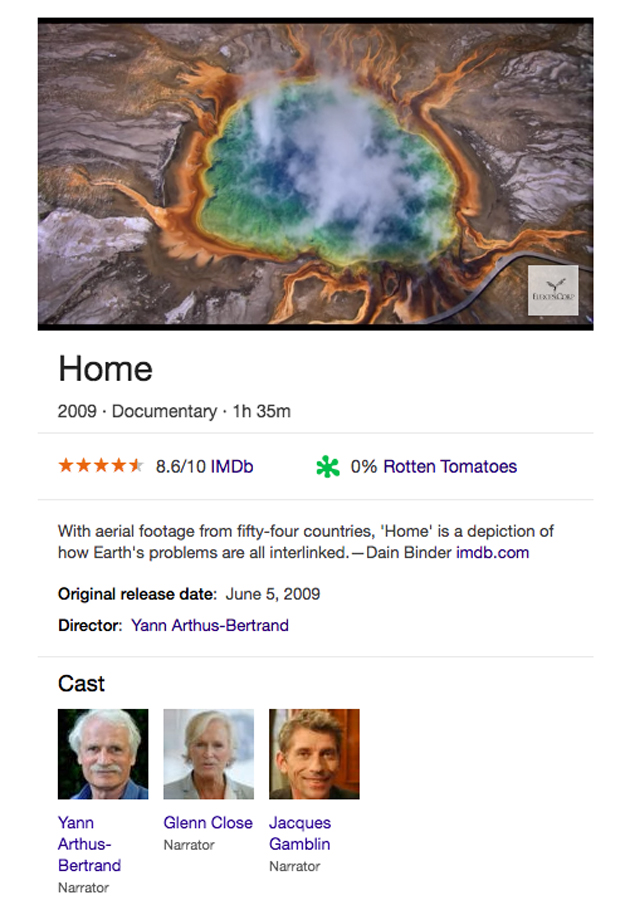 This inquiry was written back in 2012 to an organization that Glenn Close was involved with, three years after the movie Home was released.  Home was an environmental movie directed by Yann Arthus-Bertrand that had exquisite aerial pictures of either georgious natural places, or places devastated my homo sapiens.  It shows the diversity of life on earth and how humanity is threatening the ecological balance of the planet.

Knowing that Glenn Close had a keen interest in mental health issues (especially with erasing the stigma attached with them), I thought that I might be able to pique her interest in helping me - a noboby - get a powerful environmental message out that incorporated mental health into the mix in a full-length feature film.  I don't know if she ever saw this, but it was worth a try to try and get it to her.

I've long known that mental health, particularly depression, would be an aspect or theme of the movie I envision, because I experienced severe depression over the loss of the fishes in Wyoming and Idaho when I lived there back in the 1980's - mid 1990's.  This was long before I ever heard of the term solastalgia, which is loss of home or environment.  In fact, I've only heard of that term within the last two years.

So YES, this movie movie I envision - if it ever does come to fruition, could help in lessenng the stigma of mental illness.  Case in point - it would highlight the amazing difference that Greta Thunberg has made in heightening people's awaremness of climate change and other environmetnal issues.  Greta, now a 17-year old young woman with depression and autism has done something not seen since Rachel Carson wrote Silent Spring in 1962...and maybe Greta, herself, will have a cameo in this movie.

I’m sending you a very unusual request - it’s a request for help in getting two very important messages out, both of which have to do with mental illness.  The first has a direct relationship with such disorders while the second is only indirectly related.  The first deals with depression and ADD while the other has to do with sustaining the planet’s environment (did you know that some cultures consider the accumulation of private property beyond one’s needs a form of mental illness?).

Since both messages deal with behavioral maladies, they fall under the sweeping umbrella of psychology.  Consequently, it seems that in order to overcome any emotional deficiency one must somehow get in charge of oneself psychologically.

I’m compelled, or more like driven, to convey these messages, but I’m struggling to find someone to help me tell them in the right way that can make a significant difference.  Obviously, something has to be done to eliminate the stigma attached with mental illness, but more importantly something different has to highlight how we humans are fouling our nest at an alarming rate.

Each day it’s becoming more apparent that a far-reaching message is needed in order to alter mankind’s behavior towards our relationship with our surroundings.  In the trailer for Home narrated by Glenn Close she says the following in regard to the rampant loss of biological diversity, “We know that the solutions are there today.  We all have the power to change…so what are we waiting for?”

I believe I have the answer to that question, but changing human behavior certainly won’t be easy because it has to do with human nature; which in essence is psychology.  Simply put, it’ll take personal restraint; something that most of us struggle with.

I’m an Alaska fish biologist who has long been deeply concerned about the future of our fishes and much of the imperiled biota of our planet - so much so that I’ve experienced great depression over the human ignorance, arrogance, and attitudes that are threatening many of our life-sustaining ecosystems and the organisms dependent on them.

Nearly ten years ago I began writing a book about those concerns.  Unfortunately, I’m not anywhere near completing it, mostly due to two very disrupting obstacles - depression and attention deficit disorder.  Subsequently, now the story to be told has shifted to my inability to prevent such heartbreaking losses and my more recent unsuccessful efforts to find a different way of getting a message out, knowing that those two antagonists have thwarted my every effort.  As frustrating as the past decade has been, however, all has not been in vain.

My inability to finish the book has one bright spot.  Earlier this spring I prevented a woman with bipolar disorder from committing suicide.  She’d responded to a YouTube clip I put out to the world in hopes of finding literary help; she was, for me, a welcomed glimmer of hope.  She taught a college level creative writing course and believed very strongly in my desire to make a real difference.  Unfortunately, she was struggling with numerous personal issues that coalesced together and pushed her over the edge shortly after responding to my YouTube clip.

But my personal experiences with depression and a propensity to empathize provided her some comfort and a glimmer of hope.  In her words, “I must be honest with you. I was nearly hospitalized Friday because I again saw no point in continuing on. I was beat, thought the dark forces finally winning out. And it was in that solitude and drawing within myself that I began to read and seriously consider your work. Something clicked, and with the help of loving caretakers, I stabilized again and have some thing to look forward to.”

In my attempts to overcome my emotional disorders I’ve read two books that have helped me immeasurably work through some difficult times; one on depression (I Don’t Want To Talk About It by Terrence Real) and the other on ADD by Thom Hartmann.  Surprisingly, both ended - basically out of the blue - with a discussion on big picture environmental concerns.  Hmm, quite the coincidence - don’t you think?

Aldo Leopold, author of the seminal conservation-based book A Sand County Almanac, framed it best when he expressed his frustration over, “the futility of trying to improve the face of the land without improving ourselves.”  That, in my mind, means that the human race must collectively get in charge of itself psychologically.

To support my assertion just how important psychology is in the larger environmental picture, here’s an interesting YouTube clip where Martin Palmer, an environmental theologian, in his closing of a speech given before the World Wildlife Fund, chastises National Geographic for not looking inward and considering the psychological component in their conservation efforts…he even emphasizes the need for psychotherapy!   MPalmer WWF

After all those years working on my book…and going nowhere, I recently had a disheartening epiphany about how much difference a book could actually make.  Consequently, not that long ago I asked a very talented writer if Rachel Carson were alive today and wrote something akin to Silent Spring, could it ever have a similar impact?  Alas, he responded with, “As to your other question, sadly, I think that the days when a book like Silent Spring could galvanize the public are gone. It’s hard enough to get anyone to actually read an entire book at all! The world of iPhones and Facebook just makes life too darned distracting.”

I’m a fan of Dr. Stephen Covey, author of The 7 Habits of Highly Effective People, whose mantra was, “Begin with the end in mind”.  So I took those words to heart and asked what next - how can I truly make a difference knowing that whatever it would be…would have to be different?

Considering the topic at hand - i.e., psychology - some might consider me out of my mind for proposing what is likely the best way to begin overcoming the stigma associated with mental illness while getting a dire environmental message out to the masses.  Although I believe in myself and my story, there have been times that I’ve wondered if I’m not delusional to think that my story would be of interest to anyone else; especially after reading an article in Discover titled Why Do People Behave Nicely?  No one may ever know unless social psychologists shake off their fascination with jerks.  Here’s what it stated, “We humans perceive ourselves as smarter, more skilled, and more appealing than we really are”.  Yikes!

I said earlier I'm a biologist.  But unfortunately, I’m no Jeremy Wade of River Monsters fame or the late gregarious Steve Irwin - in fact I’m sort of a nobody.  None-the-less I have a powerful story - one that I think must be told because I’ve seen things those two haven’t…or the impending environmental conundrums with a perspective that they haven’t.  As one colleague told me, “Dave you have the ability to see all at once all the forces that are being brought to bear on the fishes.”  To the average person it might seem obvious that all fish biologists would understand all those forces…but that’s not the case.  Very few biologists consider the human dimension; they’re too busy studying the creatures.

I believe that my story, if told correctly, might have movie potential*.  I know that sounds extremely presumptuous, but please bear with me.  Basically it would be a biologist struggling with depression and ADD trying to get in charge of himself psychologically knowing that the human race must do the same if we are to coexist in harmony with all the other organisms of this finite planet.  As an old Forest Service colleague once told me, “You got to know sin to preach against sin.”

That’s why in the right hands and presented the right way such a story can shed light on the urgent need for all of us humans to get in charge of ourselves psychologically (i.e., mostly by displaying restraint mentioned earlier).  It’s only then will the changes come that Glenn Close referred to in Home.

Now my story, being about two enormously serious matters, is not without its humor.  No…far from it.  That’s partly because I truly lead a Northern Exposuresque lifestyle (Northern Exposure was the Emmy winning TV show about life in “bush” Alaska that aired numerous years ago).  But the life I lead is much more surreal than what the show depicted because it had to be politically correct.  I could go on and on about how bizarre my life has been the past 12 years, but I won’t.  Let’s just say that my landlord, and good friend, has referred to me as an enigma because I seem to attract unusual happenings.  Come to think of it, my life wasn’t that different when I lived in remote Idaho – or even Wyoming prior to that.  I’ve got to agree with Horace Walpole who said, “Life is a tragedy for those that feel, and a comedy for those who think.”

I’m a thinker and a feeler and have battled depression for countless years during my efforts to “save the fishes” and protect the environment, but I’ll never give up.  The following benediction sums up why I persist in my efforts to make a true difference:

May God bless you with discomfort at easy answers, half-truths and superficial relationships, so that you will live deep in your heart.

May God bless you with anger at injustice, oppression, and exploitation of people and the earth, so that you will work for justice, equity, and peace.

May God bless you with tears to shed for those who suffer, so you will reach out your hand to comfort them and change their pain to joy.

And may God bless you with enough foolishness to think that you can make a difference in the world, so you will do things that others say cannot be done.