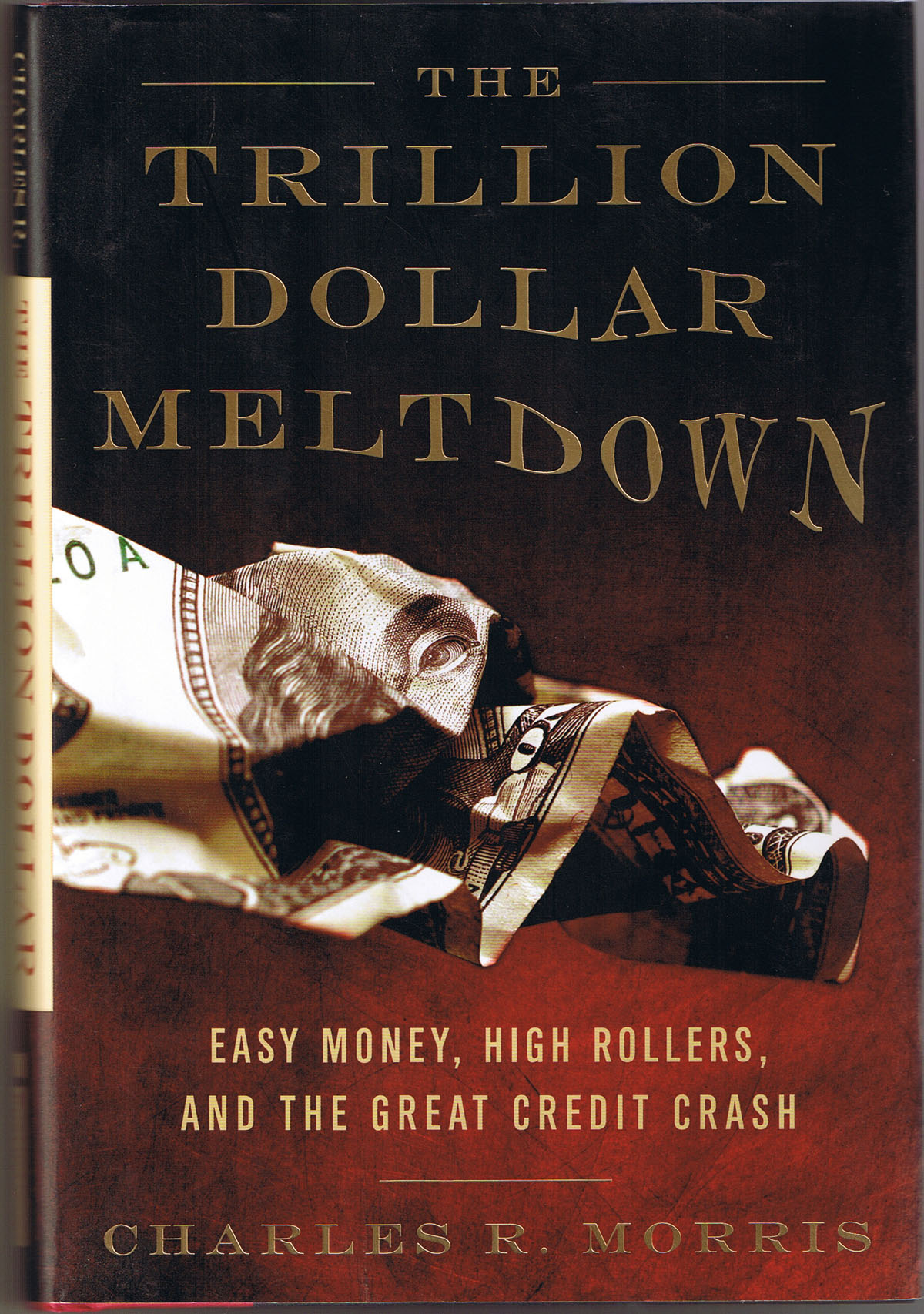 It’s been a lifelong mission to increase awareness as to the plight of aquatic resources, but so often it’s fallen on deaf ears…even among some biologists.  I’ve often asked myself what can I do differently to generate empathy for the fishes and spawn action?

So, I asked the author of The Trillion Dollar Meltdown, Charles Morris, what he would do differently, if he could, that would have steered the powers to be on a different course of action to prevent the recent economic collapse.  Mr. Morris, along with several others, predicted exactly what happened long before the credit bubble imploded.  I had hoped that if he had such a solution, then I might tap into his knowledge and help fend off many of our impending ecological collapses, particularly aquatic related ones.  There’s no limit to how naïve and optimistic us well-intentioned idealists can be!

He responded by saying,

“The problem that you’re posing is much harder than any that I think about.  Money is a metaphysical thing that we can create or destroy at will.  You’re talking about real things that die and disappear.  When they start to disappear, prices will get much higher and that may save them, or at least some.

I have no good ideas to offer.

Your message is very saddening.  I have no advice.  Fish are real entities; money is not.  Governments can will money into and out of existence at the flick of a finger.  You are dealing with a much harder problem.  Please accept all of my good wishes and hope.”

Biologists, scientists, conservationists and environmentalists have been warning of ecological collapses for many years, to the point where much of the public is apathetic to our cause.  We are often seen as Chicken Little or the boy that cried wolf.  And there will always be those who will mirror Dick Cheney’s sentiment pertaining to the economic meltdown.  In defense of the Bush administration he said, “I don’t think anybody saw this coming.”  Now I’m not blaming one political party for the economic crisis because both have certainly contributed, but if Mr. Cheney, or anyone else for that matter, were to deny being forewarned about environmental catastrophes then I’d have to accuse them of being either a liar, a cheat…or a damn fish biologist*.

*As the lone fish biologist on a 20-million-acre Yukon Delta National Wildlife Refuge, one of the many wildlife biologists would constantly tease me by saying, “You’re either a liar, a cheat…or a damn fish biologist”.

Although it might not show, we fish types do have a sense of humor!

The following is an E-mail I sent to Robert Bryce, journalist and author of Pipe Dreams: Greed, Ego, and the Death of Enron who interviewed Mr. Morris back in 2008.  I asked him to forward my plea for help on to Mr. Morris...which he graciously did:

Would it be possible to pass this along to Charles Morris?

I’d like to ask Mr. Morris - if he could go back in time to a few short years ago, what would he do differently to get people to pay more attention to his concerns for what he saw as an impending credit crisis?

I’m a fish biologist in Alaska, and although this state still has some of the most abundant and healthy fish stocks around, worldwide fish populations are tanking…and I’m extremely concerned.  For example: In the U.S., 7 percent of the mammals and birds are considered imperiled while over 20 percent of fishes, 36 percent of crayfishes and 50 percent of freshwater mussels are in some form of jeopardy. In North America approximately 39 percent of fishes are imperiled.  In West Germany, over 60 percent face a similar ominous future.  Sharks, among the world’s top predators, have declined by more than 80 percent, causing cascading effects throughout the food chain.  In N. America, one third of all aquatic species are threatened, endangered or of special concern.  In the Colorado River basin, 80 percent of the endemic aquatic fauna is seriously imperiled.  I could go on and on!

I’m currently writing a book about my concerns for the fishes (as well as the environment), and have been struggling with how to get my message out.  The warning signs have been glaring at us for some time, but it seems that the public (and too many politicians) is only more apathetic to scientist’s warnings.  On the inside cover of The Trillion Dollar Meltdown the very first sentence says, “We are living in the most reckless financial environment in recent history.”  We are also living in the most precarious position in regards to the environment that mankind has known; yet very few seem overly concerned.

Mr. Morris, in your book you state that when large, wobbly objects tumble, they go very fast.  One only has to pay attention to fisheries collapses in places like Georges Bank in the North Atlantic, the Chesapeake Bay or the ongoing over-exploitation of tuna to be alarmed.  We’re in for several large-scale ecological meltdowns that will show just how tied to the environment the economy is.  We humans are always thinking about us, not ecological systems.  The following is from a recent article on the tuna crisis: But it is the Japanese, consumers of the most bluefin tuna in the world (Economist), who will bear the consequences.  The perfect storm is approaching that will affect more than just a certain group of consumers.  I hope I don’t offend you Mr. Morris, but when will economists consider the big picture?

You state in your interview with Robert that in order to turn the economic crisis around there needs to be a radical change of course…but is that possible when considering human nature?  I have a hard time believing that societies can show the necessary restraint that such radical change would involve, especially considering every politician’s mantra, “Not at the expense of the economy.”

Much like the recent economic meltdown - people will generally only act when they’re forced into it.  That being the case, do you think there was anything you could have done differently to raise awareness…and is there anything I might do?  Or are certain things only inevitable?

Here's my final E-mail correspondence with Mr. Morris; this after asking if he had any contacts he thought could help me out...at least acknowledged my perseverence which gave me a little encouragement.  Coincidently, the original title of my long-forgotten book attempt was, Pertaining to Persistence, Perseverence, Pessimism, Perfectionism, and a Passion for Pisces.

Here's the link for a video I made seeking help - in which I mentioned him and his book:  https://www.youtube.com/watch?v=jDTVoM8US5Y&feature=youtu.be 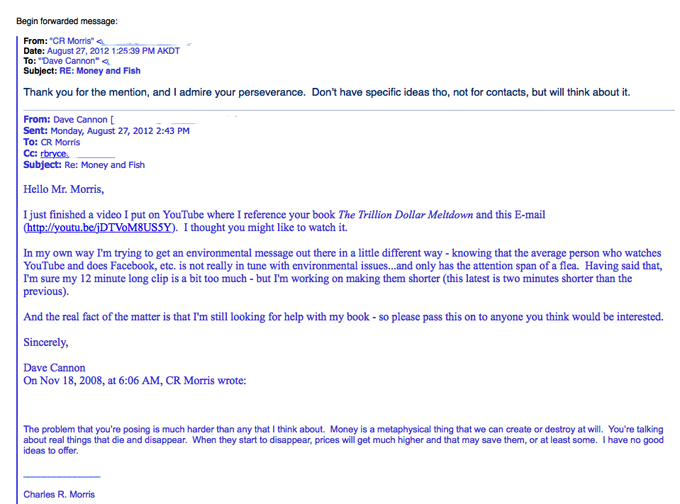