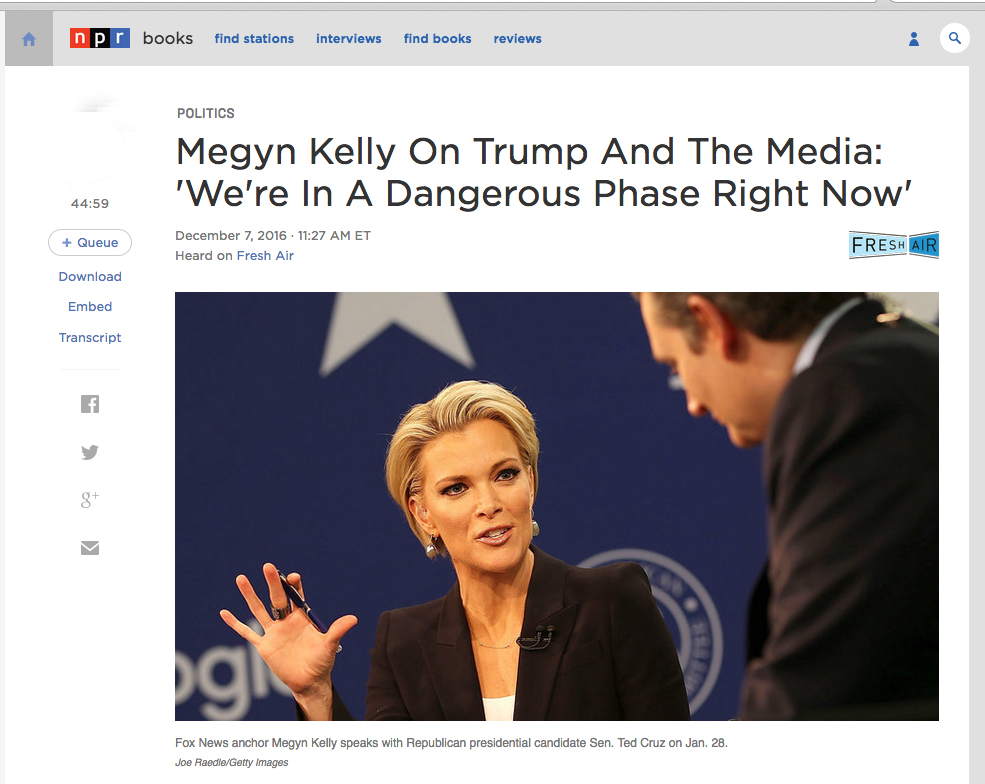 Here's an interesting interview with Megyn Kelly on NPR discussing the influence that Donald Trump has with his tweets and actions.  Here's an excerpt:  The c-word was in thousands of tweets directed at me — lots of threats to beat the hell out of me, to rape me, honestly the ugliest things you can imagine. But most of this stuff I was able to just dismiss as angry people who are trying to scare me, you know. However, there were so many that rose to the level of "OK, that one we need to pay attention to," that it did become alarming. It wasn't like I walked down the street in constant fear of someone trying to take my life, but I was very aware of it.

This interview pretty much ties together some of my recent concerns with your kind (i.e., the human race) regarding whether or not most of you can either agree with each other or believe what the other says.

Those words above, however, are very disconcering, and fortunately are from only the fringe supporters of our President-Elect, but this clip from The Daily Show, although humorous, is only a little less disconcering.  If those poeople being interviewed could watch themselves (and I'm sure some have)...would they even realize just how ill-informed they appeared?

As far as political correctness, who isn't frustrated with its implications; things on both sides are totally out of control.

Here's Miss Kelly's advice to the good people who hopefully are reading my posts (which I'm sure you'd ALL be considered good):  I knew Andrew Breitbart very well and he was great. I loved him. He was a true provocateur who would be fun about it, you know. He'd show up at a democratic protest and engage with the protesters and then he'd go have a beer with them. This is something else entirely, and I don't know that Trump can stop it. I don't know who, if anyone, can stop it. I think right now the answer is for good people to exercise their own voice and their own power.