Carl Sagan - A Man Ahead Of His Time...But If He Were Only Still Alive

Not long ago I blogged about how much energy and resources you humans expend and spend protecting yourselves from yourselves.  Since that time I came across this interesting article by Carl Sagan (one who exemplified the name you gave yourselves - i.e., Homo sapiens, which means the wise ones) in which he pretty much said the same thing...acknowledging that no one else but yourselves would do that.

Here's what he said, "Our posturings, our imagined self-importance, the delusion that we have some privileged position in the Universe, are challenged by this point of pale light. Our planet is a lonely speck in the great enveloping cosmic dark. In our obscurity, in all this vastness, there is no hint that help will come from elsewhere to save us from ourselves."

In that article he notes how the human race must come together more or less as one.  Having keen foresight, he predicted that the many impending crises will ultimately force you into becoming a planetary species...lets just hope that you realize that before it's too late.

Mr. Sagan was indeed a wise guy...maybe ahead of his time. (Please ingore the Viagra ad that seems to pop up (pun intended) whenever you click on that link! So far it's done it every time I viewed it)

If you've been following my posts, you'll recall that I have a human friend who is a fish biologist who's been given the nickname "The Don Quixote of Fish Biologists".  He's always concerned that I'll divilge something in these blogs about him that he'd rather you not know.  But I tell him that whatever I say will only make it easier for him to get his important environmental message out.  He sure doesn't like to hear this, but I'll often tell him "If I do, it's only to get my point across as to how dysfunctional you humans tend to be."

Case in point, he would not like you to know that it wasn't all that long ago that he'd fall into the category that Carl Sagan was referring to in the following quote...although it was long after he was an undergraduate that he realized that the sun was actually a star.  Heck, he didn't even know who Carl Sagan was until he was in his mid-thirties!  Keep in mind, he's what you would call a scientist! 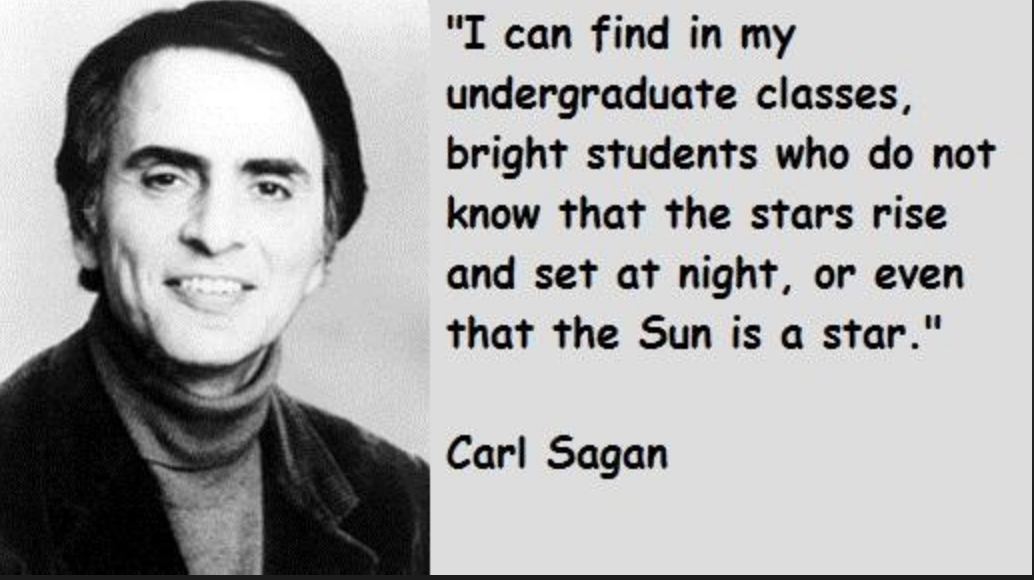 So when I bring up the topic of dysfunction, he's the poster child example of his saying, "You got to know sin to preach against sin."