Blog 2: The Human Race Must Get In Charge Of Itself Psychologically In Order To Avert Ecological Calamity 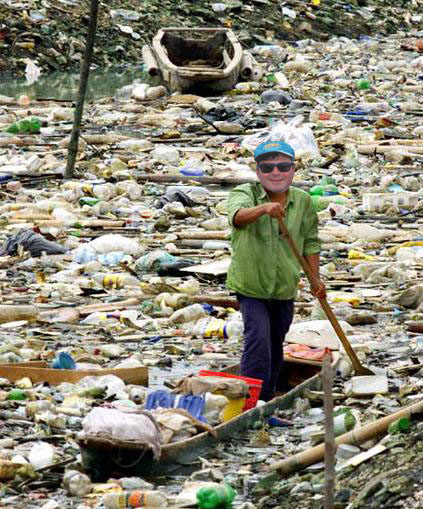 “This tendency to avoid problems and the emotional suffering inherent in them is the primary basis of all human mental illness.  Since most of us have this tendency to a greater or lesser degree, most of us are mentally ill to a greater or lesser degree, lacking complete mental health.”  M. Scott Peck, psychiatrist and bestselling author of The Road Less Traveled.

What’s The Meaning Of My Brash Statement  “The Human Race Must Get In Charge of Itself Psychologically In Order To Avert Ecological Calamity”?

If the quote by M. Scott Peck and video above titled Mental Floss - What Do Psychology & Psychotherapy Have To Do With The Environment? don’t answer that question, I’m providing additional supportive material - in your own fellow human beings’ words - that reinforces my contention that Homo sapiens have a huge hurdle to overcome if you’re ever going to come to consensus on the causes of many of your ecological and other societal conundrums…and subsequently find real solutions to them.  As Peck noted, you keep kicking cans down the road while the impending consequences only get dearer; and if you hadn’t noticed, the cans are accumulating!  Surely you recall those famous words from that illustrious possum Pogo - “We have met the enemy and he is us”?

Although I provided an introduction to myself in my initial blog, I neglected to mention that I regularly converse with a fish biologist who pays more attention to human behaviors than he does my kind.  From our discussions, it’s apparent to me that he feels that there’s little chance that you’ll be able to reverse the ubiquitous downward environmental trends and maintain any semblance of natural aquatic biodiversity.  To him, most things are only a matter of scale, and he sees our fish concerns as only a smaller cog in the bigger picture; he also believes that most of your problems are due to psychological shortcomings on your part.  I can’t count the times he’s cried on my shoulder (not literally since I don’t really have one) about all this; but I do believe I’ve seen a hidden tear or two during our conversations.  The state of the environment really gets him down, so much so that I’m about to advise him of seeing a psychologist…or maybe even psychiatrist!

My biologist friend recently passed along an article by Paul Angermeier titled The Role of Fish Biologists in Helping Society Build Ecological Sustainability.  He was rather surprised, but pleased, after reading it because the author mentions human behavior at least four times and psychology or psychologists three times.  Very few of my friend’s colleagues realize just how important psychology and the social sciences are to natural resource management.  In fact, he’s heard more than one cohort refer to the social sciences as a gross oxymoron.

But how else will you know why your race behaves in ways that are detrimental to your kind and mine…again and again?  Well, there’s a fellow from Harvard by the name of Max Bazerman who does research into why even good people make poor choices.  Here’s what he had to say in a book titled Intelligent Courage, “When I look I see common human behaviors repeated across a wide array of issues from financial decisions, to public policy decisions, to environmental decisions.  There is a set of cognitive biases that seem to grab hold of the decisions and determine an outcome that is frequently not in the best long-term interest.  Cognitive issues are, at least, a partial explanation for why we say one thing but do another.”

For all you fish lovers, this is what’s so disconcerting for me and my ilk; Bazerman asserts that, “Perhaps the most amazing example of judgment problems in our natural resource decision making is fisheries.  Here we see the same pattern over and over.”  He points out how eleven of the seventeen largest fisheries in the world are now commercially extinct - that’s nearly 65 percent!  Two specific biases he attributes to such failures are optimistic illusions and a tendency to discount the future.

Dr. Robert Gifford, an environmental psychologist from the University of Victoria, Canada, contends that psychology is, for the most part, non-existent in most environmental policy debates (Personally, I hope to change that).  He reveals pervasive environmental damage resulting directly from innate tendencies or flaws in human nature.  Among them is mindlessness where humans often act without much reflection or rational planning, like building in a flood plain or fire prone area (e.g., California chaparral choked hillside).

He contends that another cognitive impairment - environmental numbness - manifests itself when people just don’t think about issues.  Not surprisingly, he states how most people, most of the time, think about work, their friends and family, or the next big game instead of the environment (he wrote this long before the Kardiashians came on the scene).

Psychology to the Rescue (Maybe)

So at least psychologists have been on board with environmental concerns for some time…well, not exactly.  Two social psychologists, Susan Clayton and Amara Brook, were dumbfounded over how few of their colleagues missed the connection.  Here’s what they had to say in Can Psychology Help Save The World? A Model For Conservation Psychology: To date, conservation psychology has not attracted wide attention from mainstream psychology. Many psychologists are disinclined to consider environmental topics as relevant to psychological research. In 2000, for example, Clayton surveyed officers of APA (American Psychological Association) divisions to find out about division policies on environmental practices. Not only did no divisions report having such a policy, comments that were sent in included “This seems not to be a psychological issue, and thus not within our sphere” and “This is the silliest questionnaire I have filled out in a very long time. . . . It is virtually impossible to understate the importance of APA divisions [in regard to protecting the environment].”

I’m encouraged that at least people like Bazerman, Gifford, Clayton, Brook and even a few biologists like Angermeier attempt to apply what’s known about human behaviors to environmental concerns in order to promote a more sustainable world for you and me.

I know this goes against the preference of the majority of you humans, but this blog won’t be ending on a high note.  I’m afraid I’ll have to leave you with this disparaging example of what all of you are up against who are striving to leave this world a better place…environment-wise.  Much to my chagrin, one environmental psychologist, Doug McKenzie Mohr in Fostering Sustainable Behavior: An Introduction to Community-Based Social Marketing, readily admits that he’s inconsistent half of the year in regards to his actions even with his knowledge of what should be done to lesson his contribution to climate change influences.  If an environmental psychologist does not walk his talk, what does that say for the majority of you?

Since humans are such complex organisms and psychology and natural resource management - in and of themselves - are complicated, we’re not done with discussing the need for you humans to get in charge of yourselves psychologically…not by a long shot.  We’ll continue this topic in the upcoming blogs and I’ll soon demonstrate how even the U.S. Fish & Wildlife Service isn’t walking the walk when it comes to us fishes.

PLEASE PROVIDE COMMENTS TO THIS AND ANY BLOG (OR ANY ENVIRONMENTALLY ORIENTED TOPIC) ON CYPRINID CYNICALIS' FACEBOOK PAGE https://www.facebook.com/CyprinidCynicalisVent