Blog 1: An Introduction To The Vent 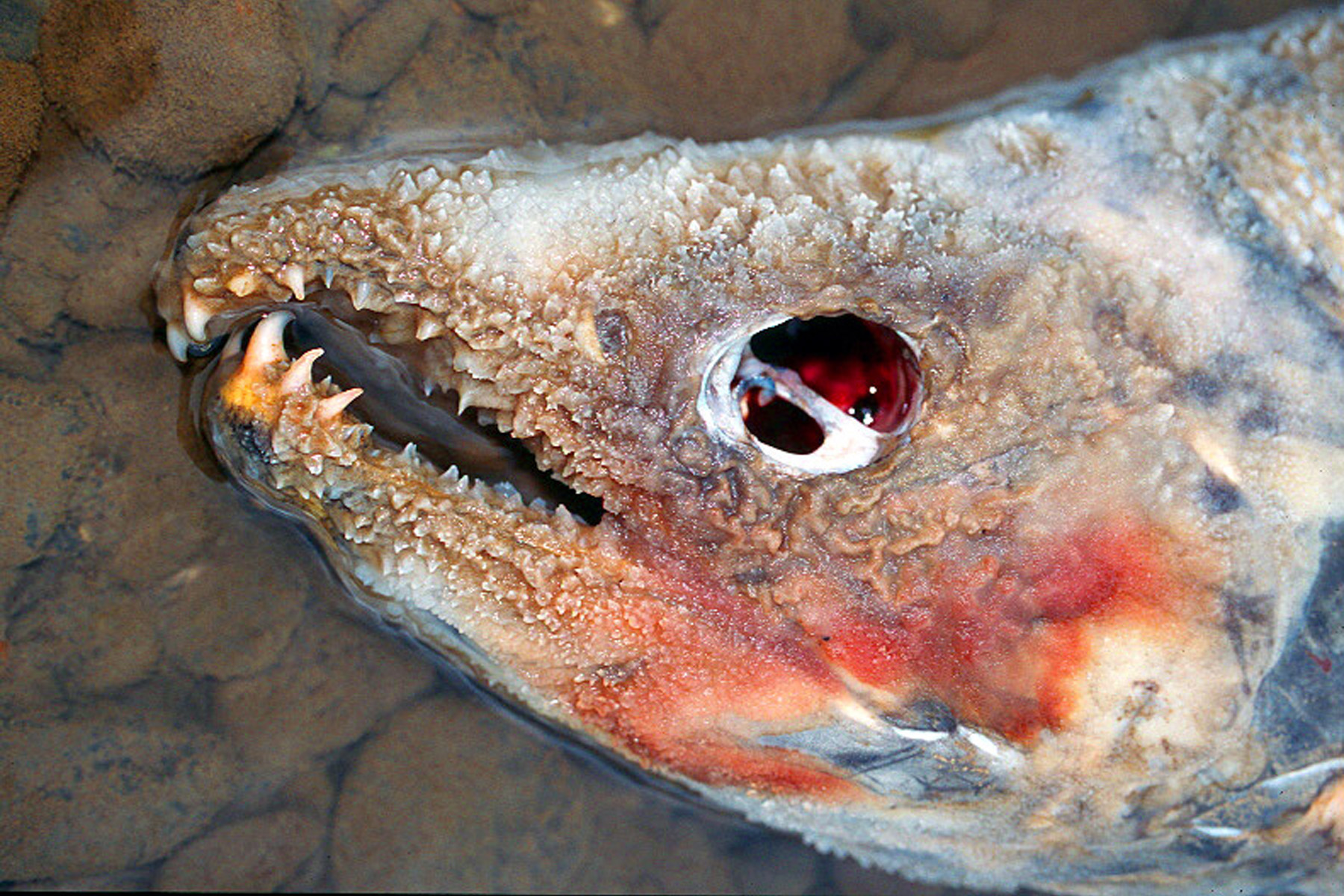 “Men occasionally stumble over the truth, but most of them pick themselves up and hurry off as if nothing ever happened.”  Winston Churchill

Introduction To This Blog & Why A Fish’s Perspective

Welcome to The Vent, where I, Cyprinid Cynicalis, will express my trepidation over the ubiquitous impending societal predicaments facing mankind - most notably those involving the environment.  This blog will take a critical and irreverent look at a species that refers to itself as “the wise ones” - at least that’s what Homo sapiens means in Latin*.  Now if you look up the word sapient in the dictionary you’ll find two questionable words that would raise my eyebrows if I had them - sagacious and rational - listed as synonyms…hmmmm.

I know that you humans have a strong propensity to attempt that, but as far as nature and why we animals do the things we do, sometimes you’re so off base it’s pathetic!  To be quite frank, the purpose of this blog is to set you humans straight on a number of pressing issues.

Since I’m writing this blog for your benefit (i.e., mankind), I’ll do my best to keep the length of my muses short because I know how you tend to have relatively short attention spans (have you seen the Vine 6-second videos?).  For now I’ll just blog and Facebook because I loathe tweeting; besides, there are probably enough twits out there already.

Unfortunately, according to one blog titled The Blog Is Dead, Long Live The Blog*, I’ll probably be forced into becoming a twit, myself, some day.  Here’s what that blogger stated, “Instead of blogging, people are posting to Tumblr, tweeting, pinning things to their board, posting to Reddit, Snapchatting, updating Facebook statuses, Instagramming, and publishing on Medium. In 1997, wired teens created online diaries, and in 2004 the blog was king. Today, teens are about as likely to start a blog (over Instagramming or Snapchatting) as they are to buy a music CD. Blogs are for 40-somethings with kids.”

Please don’t be offended if you’re in that 40+ category, which I’m guessing most of you are.  But in order to reach your kids, I’ll occasionally link articles from I Fucking Love Science* and other eclectic and popular sites that your cohort isn’t too familiar with.  I’ll also link contemporary articles like this pornographic one on amorous salmon performing wild, lewd and lascivious sex acts right out in the open in a public stream for everyone to see (SS).

Why would I lower myself to exploiting my fellow fishes who are only doing what comes naturally?  It has to do with what one of you, a marine biologist turned filmmaker, asserts in Don’t Be Such A Scientist*.  In that book, Randy Olson says that there are four organs to consider in any mass communication effort: 1) the head, 2) the heart, 3) the gut, and 4) the gonads.  In regards to communicating to the masses (which is what I intend to do), he contends that, “The object is to move the process down out of your head, into your heart with sincerity, into your gut with humor, and ideally, if you’re sexy enough, into your lower organs with sex appeal.”

Right Said Fred might have been too sexy for his shirt, car, hat and cat, but I doubt that we fishes are too sexy for anything.  However, I couldn’t think of anything sexier then two slimy salmon getting it on hot and heavy over a freshly dug redd with the rush of cold water streaming past their faces as lively sperm within the male’s milt penetrates the micropyles of his partner’s thousands of eggs at just the right instant, knowing that this is their last hurrah in life.

Here’s how Rowan Jacobsen described the dirty deed of Yukon River Chinook salmon in Fast fish, loose fish: Who will own Alaska’s disappearing salmon?: As it powers upriver it deflates, burning oil and muscle in its mitochondrial engines, the fuel gauge hitting empty just as it arrives home, the coloring no longer silver but enflamed bright red, nothing left to do but blow out sperm or eggs over the gravel, give it all to the river, and die a bag of skin and bones. Under ideal conditions—no fishing, lots of food and habitat—about five of a female’s four thousand eggs will return to the stream as adult fish.

After all, that’s the impetus of Ray Troll’s popular Spawn Till You Die t-shirt (Troll) that you humans lust after so much.

Sorry if I got carried away there, but the topic of sex tends to do that with many of us fishes…do any of you humans have that problem?

Back to the task at hand, the purpose of this blog is to heighten you humans’ awareness of the many impending ecological crises, and openly discuss what it is that those of you who genuinely care so much about them are really up against.  It’s akin to all those reality shows you have, except this site will have no hokiness.  Truth be told, something has to break through all the superfluous distractions mentioned above - for it’ll take every cohort’s involvement to turn the loss of biological diversity around.

My concern is that not enough of you realize that sooner or later the tipping point will be reached where the continued loss of biological diversity will result in a cascading calamity that affects you humans like no other disaster has affected your kind.  My ultimate aim is to get to those who don’t realize that…or who are in denial of that fact.

My solution for averting such misfortune is for you humans, individually and collectively, to get in charge of yourselves psychologically.  I’ll have much more on this topic in future posts.

You’re probably wondering why me, a fish, is providing my perspective?  Well, I believe that I can say things about you humans that another human can’t.  And in all sincerity, I’ll do my best not to offend you…at least not too often or too greatly.  I know that I must keep in mind that it’s not what I say, but how I say it that counts.

Before I provide my humble opinion, it’s only fitting that I provide a brief personal vitae.  Although my official birth name is Cyprinidae, my parents call me Cyprinid for short.  Cyprinidae is actually the taxonomic name of my very large and diverse family, the minnows.  I know that most of you - unless you're an ichthyologist - call any small fish a minnow, but like many instances in the coming months I’ll point out how similar faulty logic has caused some serious conundrums.

For the sake of brevity, I’ll hold off discussing my last name, but it’ll probably be apparent after only a few blogs as to its derivation.

Why the name The Vent?  Well, I thought it appropriate to show my sense of humor because if I didn’t sometimes laugh, I surely would cry over the ever-deteriorating state of the environment.  You folks have a saying that opinions are like assholes - everyone has one and most of them stink.  We fishes don’t have one of those, per se.  We don’t have separate bung and pee holes, we have a common orifice where excreta, milt and eggs are expelled and it’s called a vent.  So in human speak, it’s a tongue-in-cheek play on words (or my vernacular - tongue-in-operculum) because I will spew forth my thoughts on what you humans need to do in order to progress as a species in a positive direction.

Although the majority of the upcoming posts will cover topics that I’m most familiar with, namely fish, fish management and other environmental matters, I’ll eventually branch out to such eclectic subjects as politics*, religion*, economics*, morality*, and psychology*.  Come to think of it, all those topics have something, if not everything, to do with the declining state of the environment.

Having said all this - the Facebook page of Cyprinid Cynicalis - which is where you can comment on these blogs - is meant to provoke serious dialogue for many of mankind’s pressing issues.  Although some might accuse me of having a pessimistic perspective or being a little too snarky, I do hold out some hope that you humans can find it within yourselves to somehow get in charge of yourselves psychologically so that we all avert some nasty consequences down the road.

The Blog Is Dead, Long Live The Blog (LLTB)

Don’t Be Such A Scientist  (DBSS).

Economics - Center for the Advancement of the Steady State Economy (steadystate)

Morality - Sinners, repent!  How our natural self-bias got us into this mess (MSoule)

Psychology - Can Psychology Help Save The World? (canpsychsaveworld).

PLEASE PROVIDE COMMENTS TO THIS AND ANY BLOG (OR ANY ENVIRONMENTALLY ORIENTED TOPIC) ON CYPRINID CYNICALIS' FACEBOOK PAGE   https://www.facebook.com/CyprinidCynicalisVent